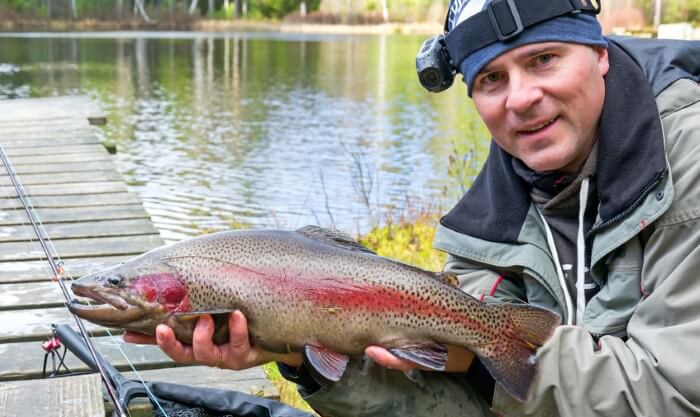 Trout are one of the most common species of fish on earth. You can catch trout just about anywhere.

This guide will give you the basics on how to catch freshwater trout.

Trout are a cold water fish. They’re normally associated with creeks and rivers.

They’re often found in moving water where they will wait in current breaks and ambush their food.

But trout aren’t restricted to just moving water. You can find them in ponds and lakes, too. These are usually stocked populations.

The Great Lakes also have many different trout species. And in these large bodies of water, they can get very big.

In this article, we’ll focus on trout in streams, rivers and smaller lakes.

Trout are more likely to be found in wooded areas with a large abundance of insects. It’s these insects that will provide much of the food that these trout eat in their early years.

In the Springtime when insects hatch, trout can be found gorging themselves.

Trout also eat smaller fish such as minnows. Once they get really big though, you may find that they concentrate on larger prey. They’ll even feed on small crustaceans such as small crayfish.

To start, if you’re going to be fishing small streams and rivers for average sized trout, you’ll probably want to start with a spinning setup.

A light action spinning rod and an ultralight to light spinning reel are a great starting setup.

If you intend to start with fly fishing, check out my getting started fly fishing guide. You can find it here: Fly Fishing How To.

As for your spinning outfit, you’ll want a spinning rod that’s about 6 feet long. It should handle lures ranging in weight from 1/16th ounce to 1/4 ounce.

Make sure the rod feels comfortable in your hands. If it’s your first rod, you should buy it in person as opposed to online. This will let you get a feel for it. If you can try it with the reel you are thinking about buying, even better.

If you go to a local tackle shop, the people there should be able to help you out with recommendations.

Once you have used a couple of different outfits, then buying online becomes easier. You’ll have a much better idea of what features you’re looking for.

As for the line, start off with 6 pound test monofilament or fluorocarbon.

For catching trout, I prefer to user clear colored mono or fluoro. You can find green fluorocarbon line on the market, but I haven’t experienced any advantage using it.

I also prefer using single piece rods for trout fishing. Two piece rods are great for travel and storage, but I feel like they sacrifice sensitivity.

Trout strikes in current can sometimes be difficult to detect, so you want a setup that’s as sensitive as possible.

Some trout anglers also like to carry a landing net. It’s a very useful too. If you get one, I would urge you to get one with rubberized net material. This helps retain the trout’s slime layer, which should improve fish survival rates for catch and release anglers.

A net will also help you lose fewer fish as you get them close in for landing.

Trout lures can run the gamut. You can catch them on soft plastics, scented power baits, hard plastic jerkbaits, etc.

One of the most popular lures for trout is the inline spinner. If you’re using light spinning gear, then this is a top lure to try.

These are made with a metal wire that has a spinning blade attached to it.  At the back end there is a treble hook.

The treble hook is usually dressed. This means that it will have some type of hair or feather adornment on the hook. The most common type of adornment is bucktail.

Inline spinners are normally cast upstream and retrieved downstream. When retrieving a spinner you have to be sure to retrieve it fast enough to get the spinner to spin.

Passing an inline spinner past a current break such as a log or rock in blocking stream current is a great tactic.

You can get some smaller soft plastics that are intended for trout fishing. Small swimbaits that you thread on a jig head are a great way to catch trout.

Trout magnets are a prime example of soft plastic trout lures. They are are extremely light though. So, you’ll definitely want an ultralight casting setup.

These jig heads start at 1/64th of an ounce. I would recommend an outfit designed for line no heavier than 4 pound test for casting these tiny swimbaits.

Of course, you can go bigger than this. Try a standard curly tail grub. You can thread one on a 1/8th ounce jig.

You should be able to cast this on a standard light spinning setup. Even some finesse baitcasters can cast these small trout lures.

Soft plastics like this should work well on both streams and lakes.

When fishing lakes or ponds, try vertically jigging soft plastics swimbaits over structure. This can be especially effective when the fish are deep.

Normally, anglers don’t associate jerkbaits with trout fishing. But they can definitely work.

Small floating Rapalas in a rainbow trout pattern can be very effective on small streams.

Simply fish them downstream and retrieve them by pools and current breaks.

Look for obvious ambush points. For example, if there is a boulder in a shallow river, cast upstream past the boulder.

Then, retrieve the jerkbait fast enough to get the action going. Pass the jerkbait close to the boulder. Don’t be surprised to see a trout dart out and claim your lure.

There are sinking versions of these jerkbaits too. So, if you’re looking for deeper trout in stocked lakes and ponds, sinking jerkbaits are worth trying.

Try counting them down to a target depth and then vertically jig them up and down.  It does help to have a sonar unit for this type of fishing.

Different Trout Species And How To Catch Them.

How To Catch Rainbow Trout

Rainbow trout are usually found in freshwater streams across America. They inhabit colder waters so you won’t find them very far south.

Some Rainbow trout venture out to sea for 2 or 3 years. They then return to freshwater to spawn. Rainbow trout that do this are called Steelhead.

Like all trout, Rainbow trout are predators. They feed mostly on insects when they’re young.

Later as they become juveniles they start to feed on small fish and other aquatic creatures.

One of my favorite lures for catching freshwater Rainbow Trout in streams is a small spinner with a dressed treble hook.

Small swimbaits like the trout magnet will also work.

Rainbow trout will also eat fish eggs. Many anglers collect fish eggs to use them as bait for catching trout.

How To Catch Brown Trout

Brown trout can be found throughout the US and around the world.

Like most trout, they spawn and live,, at least their juvenile years in streams and rivers.

You can catch them using many of the same techniques you would use for other species of trout.

You can use spinners, soft plastics and smelly baits or fish eggs.

In the Great Lakes, you can catch some monster Brown trout. Lake Michigan has a great Brown trout fishery. They were originally stocked here but they have also successfully reproduced in the wild.

Once they migrate into Lake Michigan, they can really pack on the pounds. You can easily catch a 20 pound Brown trout.

You’ll need to upsize your lures and tackle. Spoons, live bait, soft plastics, jigs and crankbaits are all potentially effective on these huge browns.

How To Catch Brook Trout

Brook trout are another popular trout species with anglers. They’re known for having beautiful markings. They can be found in streams and rivers with colder water.

To catch brookies as they’re known you can use small spinners such as #0 sized mepps or Blue Fox brands.

Brook trout can also be caught with small worms such as leaf worms.  Floating these freely is a good presentation.

If you have trouble casting such a small bait, try using the smallest split shot you can.

How To Catch Cutthroat Trout

Cutthroat trout are found mostly in western waters. They’re identified by their red marking on their throat area and gill plates.

They’re also related to rainbow trout. As a result, many of the same tactics that you would use for Rainbow trout, will work for Cutthroats.

One of the key challenges to catching Cutthroats is finding them. The Pacific Northwest from Alaska down to Northern California is a good place to start your search.

Travel a bit east and you can find Cutthroats from Montana down all the way to New Mexico and Arizona.

They’ve also been stocked in many other locations across the US. You can even find them along the northeastern seaboard.

2 thoughts on “How To Catch Trout”